BRIGHAM CITY — There is a Tibetan proverb that says it is better to live one day as a tiger than a thousand years as a sheep.

That tiger turned into a pilot, served his country in the U.S. Army and lost his life in a helicopter crash in Afghanistan on Nov. 20 at the young age of 25.

On Monday [December 9, 2019], he was laid to rest with full military honors at the Brigham City Cemetery. Earlier that day, an outpouring of family and friends attended his funeral service and had a chance to ponder that proverb about the tiger with the saying scrawled across his funeral program.

“The loss of this warrior, son and friend has left us devastated and breathless,” said Utah National Guard Chaplain Timothy C. Clayson during the graveside service.

But Clayson urged family, and especially his widow McKenzie, to draw on the “covenant” made by friends and others to mourn the loss of the young man, and know that they are not alone in their journey of grief.

Royal K. Norman, Fuchigami’s grandfather, dedicated and blessed the gravesite and in prayer asked that freedom reign because of the sacrifices the young man made serving his country.

Fuchigami and two others were killed last month in a helicopter crash while providing aerial security to ground troops in the Logar province outside of Kabul.

Originally from Hawaii and stationed at Fort Hood, Fuchigami graduated from Rancho High School in Clark County, Nevada, participating in its aviation program. According to his obituary, he was one of the youngest people in the school’s history to get a pilot’s license 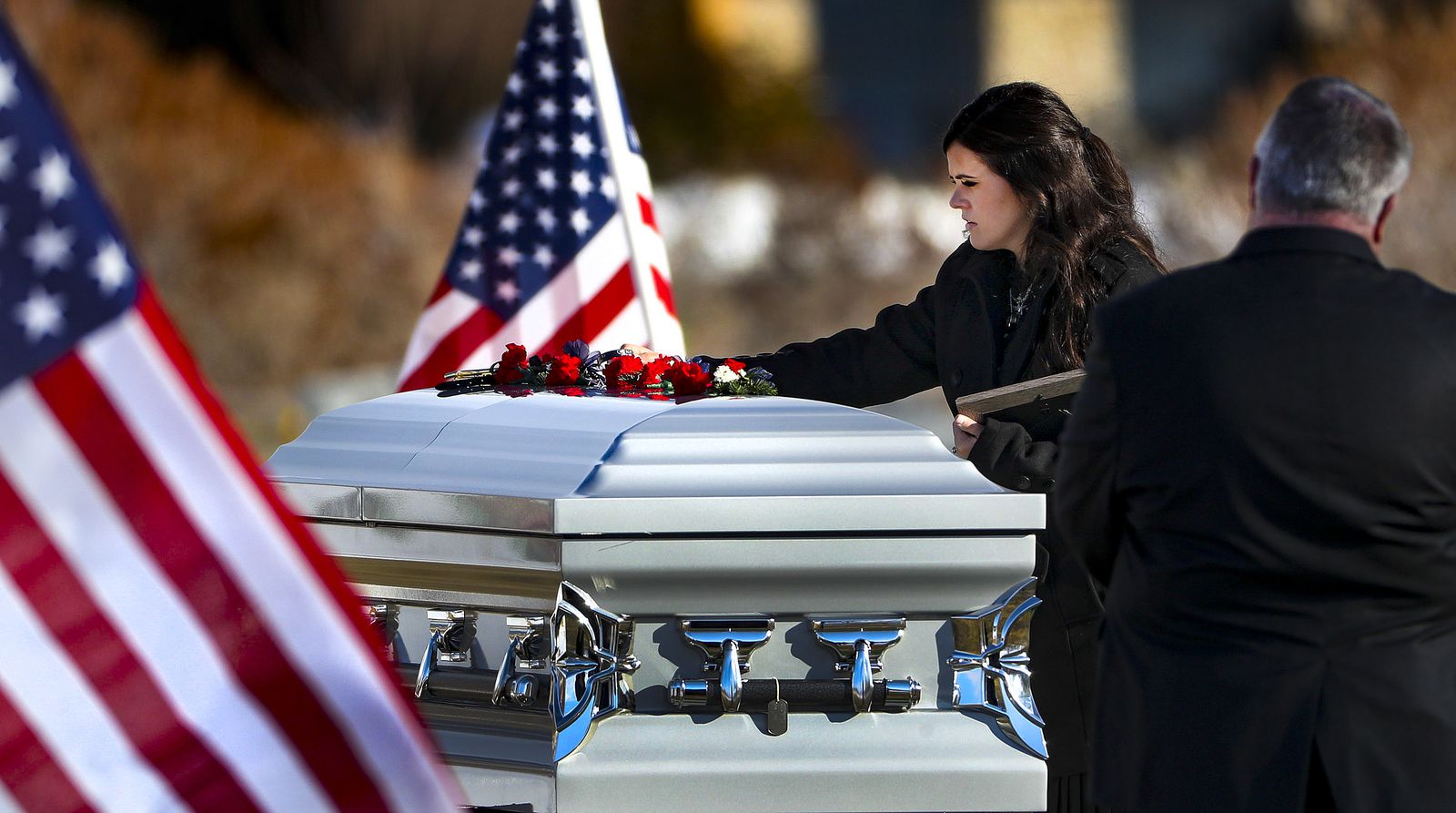 McKenzie Norman Fuchigami, wife of Chief Warrant Officer 2 Kirk T. Fuchigami Jr., rests her hand on her husband’s casket during graveside services at the Brigham City Cemetery on Monday, Dec. 9, 2019. Fuchigami and his co-pilot died when their helicopter crashed as they provided security for troops on the ground in Logar Province in eastern Afghanistan.  Steve Griffin, Deseret News.

He served a mission for The Church of Jesus Christ of Latter-day Saints in Kobe, Japan, and married McKenzie Norman, from Corinne, Box Elder County, in March of 2019 in the Ogden Utah Temple.

In addition to the 21-gun salute, four military helicopters did a fly over, and performed the missing man formation in which one cuts away from the rest.

His widow, mother and father all received the folded flags.

One of those carrying out the military ritual was Norman Nelson, a member of the Veterans of Foreign Wars.

“It’s tough when you know the family,” he said.

Nelson, 79, said the VFW serving four counties in northern Utah has performed its services at 278 burials this year.

He presented Fuchigami’s widow with the spent casings from the 21-gun salute and afterward he said the tight-knit family will find comfort in each other and their community of friends.

Some of that community on Monday turned out with U.S. flags to show their support for the fallen pilot.

Adrianne Murray pulled both her high school sons out of classes at Box Elder High School to watch the procession.

“I wanted to pay respect to him because he died for our country,” said one son, Sackett Hunsaker, 15, as he held the U.S. flag.

Murray said she wished the entire school had made turning out for the procession a field trip. She also called schools and a dealership to urge them to fly the flag at half-staff.

“I have a 25-year-old so maybe I am taking it a bit personal,” she said, chaffing over her desire to have more community participation. “It’s saddening.”

Several hundred people bid farewell at the cemetery, however, and the procession escorting the fallen soldier to the cemetery included police officers from multiple jurisdictions, a ladder truck arch, the military and Patriot Guard, to name a few.

We honor you, Kirk Fuchigami.