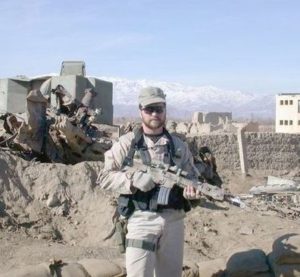 John A. Chapman was born on July 14, 1965 in Massachusetts but spent most of his young life in Connecticut, graduating from Windsor Locks High School in 1983. At the age of 20, he enlisted in the U.S. Air Force, as an Information Systems Operator. He later volunteered to be a Combat Controller, where he was tasked to solve air and ground problems in different conflict and crisis situations.
He had assignments stationed in Colorado, North Carolina, and Okinawa where he became an expert in reconnaissance operations, air traffic control, and terminal attack control operations. In addition to his mental agility, he has had also mastered the physical demands of combat as an experienced static line and military free fall jumper, combat diver, and earned jumpmaster and dive supervisor qualifications.
He was then selected for a special duty assignment with the 24th Special Tactics Squadron. As a team leader, he worked with personnel training them for their roles as special tactics operators, prepared them to conduct precision strike, personnel recovery, and special operations missions around the world. While deployed, Sergeant Chapman directed close air support aircraft, delivering destructive ordnance on enemy targets in non-permissive environments.
On March 4, 2002, Sergeant John A. Chapman was in Afghanistan as part of Operation Anaconda. Sergeant Chapman’s helicopter was hit with heavy fire from al Qaeda, one member of the team, Neil Roberts, fell from the back of the aircraft, and the helicopter ended up crash landing in a valley below the Takur Ghar mountain. Sergeant Chapman and the rest of the special operations team, including fellow Medal of Honor recipient Britt Slabinksi, volunteered to return to the enemy filled, snowy mountaintop in an attempt to rescue their fallen teammate.
Sergeant Chapman charged into the enemy forces seizing their bunker and killing the forces inside. He then moved from the bunker, completely revealing himself, to engage an enemy machinegun firing at his team. It was at this point he was severely injured, presumed dead, and his teammates evacuated the mountaintop. Chapman regained consciousness and continued to fight, engaging with multiple enemy forces before making the ultimate sacrifice.
“Tech. Sgt. John Chapman earned America’s highest military award, the Medal of Honor, for the actions he performed to save fellow Americans on a mountain in Afghanistan more than 16 years ago,” Secretary of the Air Force Heather Wilson said in a statement. “He will forever be an example of what it means to be one of America’s best and bravest Airmen.”
On August 9, 2018, the Air Force released overhead footage of the final moments of Tech Sgt. John Chapman’s heroic life. This is the first Medal of Honor to be awarded using surveillance footage rather than eye witness accounts.
“Chappy” as his teammates called him, was always a team oriented and humble man. Chappy’s commander at the time of his final actions had this to say
“John was always selfless – it didn’t just emerge on Takur Ghar – he had always been selfless and highly competent, and thank God for all those qualities,” said retired Air Force Col. Ken Rodriguez, Chapman’s commander at the time. “He could have hunkered down in the bunker and waited for the (Quick Reaction Force) and (Combat Search and Rescue) team to come in, but he assessed the situation and selflessly gave his life for them.”
Technical Sgt. John Chapman [was] posthumously awarded the Medal of Honor in a ceremony at the White House on August 22, 2018. President Donald Trump [presented] the Medal to Chapman’s wife, Valerie Nessel, and their families commemorated his life and his actions that were above and beyond the call of duty.
John Chapman’s story and spirit will live on in the lives of his family, friends and teammates. His wife, Valerie has said, “[John] would want to recognize the other men that lost their lives. Even though he did something he was awarded the Medal of Honor for, he would not want the other guys to be forgotten – that they were part of the team together. I think he would say that his Medal of Honor was not just for him, but for all of the guys who were lost.”
We honor you, John Chapman.