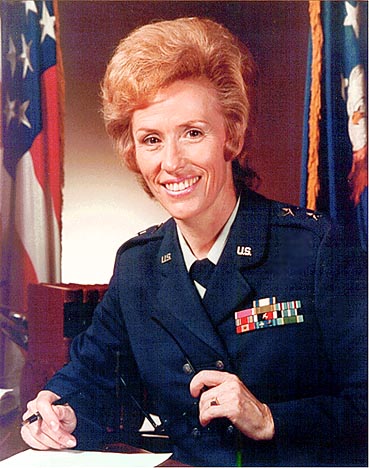 Jeanne M. Holm was the first woman in the armed forces to be promoted to the rank of Major General (1973), and this was only one of her many firsts. She served in the Army from 1942-1945 and transferred to the Air Force in 1948, when a new law integrated women in the regular armed forces. Gen. Holm served in a variety of personnel assignments, including Director of Women in the Air Force from 1965-73. She played a significant role in eliminating restrictions on numbers of women serving in all ranks, expanding job and duty station assignments for women, opening ROTC and service academies to women, and changing the policies on the status of women in the armed forces. According to Brig. Gen. Wilma L. Vaught, “Gen. Jeanne Holm is recognized as the single driving force in achieving parity for military women and making them a viable part of the mainstream military.” After her retirement, she served as a Special Assistant on Women for President Ford and as a policy consultant for the Carter administration. She is the author of Women in the Military, An Unfinished Revolution (Presidio Press, 1986, revised edition, 1992).
We honor you, Jeanne Holm.