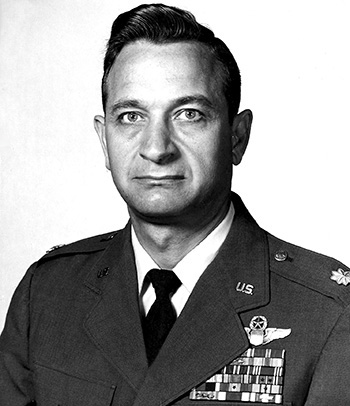 Dick Bazzell was born on December 6, 1925, in Delta, Missouri. He served in the U.S. Merchant Marines from September 1943 to July 1944, and then enlisted in the U.S. Army on September 7, 1944. After completing basic training at Fort McClellan, Alabama, he was assigned as an infantryman with 1st Platoon, Easy Company, 2nd Battalion, 324th Infantry Regiment of the 44th Infantry Division, deploying to Europe from February to July 1945. SSG Bazzell received an honorable discharge from the Army on June 28, 1946, and later enlisted in the U.S. Air Force Reserve on September 20, 1948. He was commissioned a 2d Lt in the Air Force on February 17, 1951, and went on active duty beginning September 30, 1951.
Lt Bazzell next completed Radar Observer Training at James Connally AFB, Texas, in February 1952, followed by Aircrew Interceptor Training at Tyndall AFB, Florida, in April 1952. He served as an F-94C Starfire Radar Intercept Officer with the 58th Fighter Interceptor Squadron at Otis AFB, Massachusetts, from April 1952 to March 1953, and then completed pilot training, earning his pilot wings at Bryan AB, Texas, in February 1954. After completing F-84 Thunderjet Combat Crew Training, Lt Bazzell served as an instructor pilot with the 3625th and then the 3626th Combat Crew Training Groups at Tyndall AFB from June 1954 to November 1958. Capt Bazzell served as a Weapons Controller and Operations Officer with the 720th Aircraft Control and Warning Squadron at Middleton Island, Alaska, from December 1958 to December 1959. His next assignment was as a Weapons Controller and then Detachment Commander of Detachment 1, 728th AC&W Squadron at Pope AFB, North Carolina, from December 1959 to September 1961.
He then received an Air Force Institute of Technology assignment to complete his bachelor’s degree at Oklahoma State University from September 1961 to August 1963. His next assignment was in the Telemetry Section Range Development Laboratory with the 3208th Test Group at Eglin AFB, Florida, from August 1963 to February 1964, followed by service as a Physicist in the Data & Telemetry Branch with Headquarters Air Proving Ground Command at Eglin from February 1964 to October 1966. He next completed F-105 Thunderchief Combat Crew Training in March 1967, and then served as an F-105 pilot and Chief of Briefing-Scheduling with the 388th Tactical Fighter Wing at Korat Royal Thai AFB, Thailand, from May 1967 to February 1968. Maj Bazzell’s final assignment was as a Laboratory Staff Scientist with the Air Force Armament Laboratory, Armament Development and Test Center with Air Force Systems Command at Eglin AFB from March 1968 until his retirement from the Air Force on March 1, 1974.
Bizzell earned 11 Distinguished Flying Crosses during his time of service. His 10th (of 11) reads:
“Major Wintford L. Bazzell distinguished himself by heroism while participating in aerial flight as a Pilot over North Vietnam on 19 December 1967. On that date, Major Bazzell was a member of a flight of four F-105 Thunderchiefs assigned to engage hostile surface to air missile sites in support of a major attack. Under continuous fire from eight surface to air missile sites and countless antiaircraft artillery sites, Major Bazzell made repeated attacks on the missile sites threatening the strike force. As a direct result of his courageous actions, the force was able to successfully attack its assigned target in the most heavily defended area of North Vietnam without the loss of a single aircraft. The outstanding heroism and selfless devotion to duty displayed by Major Bazzell reflect great credit upon himself and the United States Air Force.”
We honor you, Wintford Bazzell.