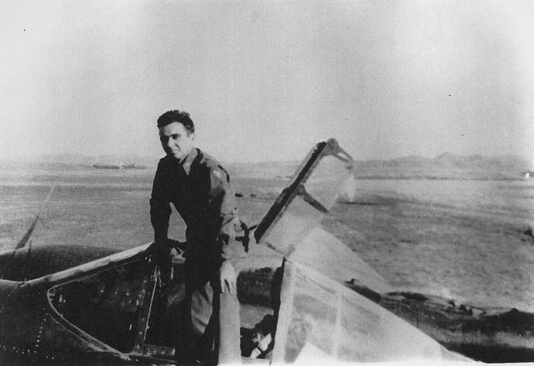 Raley, 84, was “hooked” on becoming a pilot at age 7 after he and his father flew in a barnstorming World War I biplane in their home town of Demopolis. A flight with an instructor at Wright Field in Dayton, Ohio, at age 13 further fed Raley’s appetite to become a pilot. He wanted to be a fighter pilot after the P-38, the largest single-seat fighter in the Army, came out in 1939.
Raley would get his chance at 19 when he left the University of Alabama, where he was studying mechanical engineering, and passed the aviation cadet exam in February 1942. After classroom and flight training in California and Arizona, he was shipped to Casablanca, Morocco, in June 1943. After flying missions to Tunisia from Morocco, Raley was assigned to a fighter squadron of the 12th Air Force in Tunis, Tunisia. At 20, Raley was the youngest pilot in the squadron. He worked his way up from wing man, element leader and flight leader to squad leader, where he led a group of 12 planes.
Raley began flying combat missions on Aug. 19, 1943, escorting B-17 bombers from Tunisia to Foggia, Italy. He saw five B-17s shot down on his first mission. “I thought, ‘Good grief, this is mission No. 1. I’ve got 50 missions,’ ” Raley said. Soon, Raley’s group moved to Sicily, where they continued flying missions – some times twice a day – against the German Army in Salerno, Italy. “I was getting concerned about living to be 21 years old,” Raley said. “I was getting to be weary of war.”
Raley’s squadron “did a little bit of everything” from escorting bombers to dive bombing and strafing. During his 48 missions, Raley shot down two German Messerschmitt 109 fighters and destroyed two others parked at an airfield.
On his 48th mission in late January 1944, one engine in Raley’s P-38 was hit by enemy fire. Flames were shooting 25 feet behind the engine and Raley wanted to head to the coast to ditch the plane. But enemy fire started hitting the remaining operating engine and a 20 mm shell landed in the cockpit floorboard. The shell didn’t explode, but it went through the plane’s fuel tank. “Flames were just boiling up,” Raley said. It was time to bail out, but Raley was flying about 100 feet off the ground, way below the minimum 500 feet. But with his plane stalling, Raley was able to get to 300 feet and somersaulted out of the plane.
He landed about 50 feet from several dozen German soldiers. He took a step in the other direction, but turned his head to see the soldiers with their guns pointed at his chest. He stopped. The soldiers stood him against a wall and were arguing among themselves when the non-commissioned officer walked up and saved him. The fire had erased Raley’s eyelashes and most of his eyebrows. His eyes were stinging. “I was a bloody mess,” he said.
Raley was held in Laterina in the Tuscany region of Italy for about a month. “It was just a hellhole,” he said. “We didn’t even get water to drink. It was cold.” He was then shipped by rail box car to Munich, where he spent two months in Stalag 7-A. He spent some time there in solitary confinement because he refused to talk during interrogation. Raley was transferred to Stalag Luft 1 in Barth, Germany, near the Baltic Sea. He spent a year and two days there. It was cold and the prisoners ate barley soup, which they had to pick grub worms out of before eating it, he said.
The camp was “unpleasant,” Raley said. “But I was never beaten. I was never put in handcuffs or leg irons.” The Russian Army liberated the camp on April 30, 1945, a day after the Germans abandoned the camp, Raley said. “The Russians were very good to us,” Raley said. “They were very rough on the Germans.”
Raley left active duty after arriving home, but joined the Air Force Reserve. He retired from the reserves in 1974 as a full colonel.
We honor you, Nathaniel Raley.