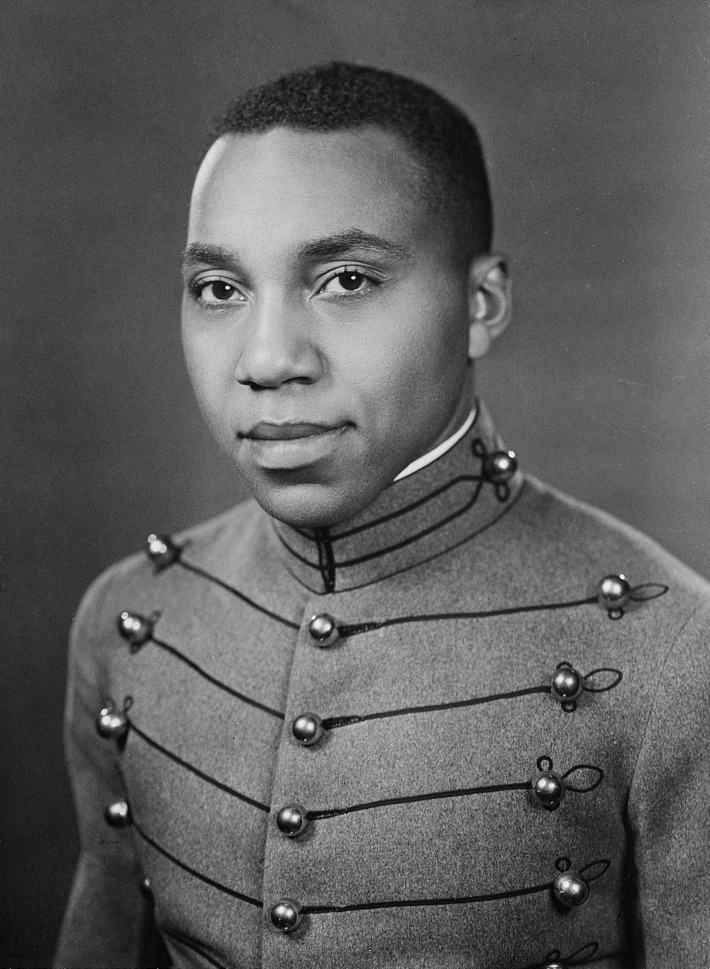 Clarence entered West Point on 1 Jul 1939 along with some 350 classmates. When he entered the Academy, he under­went a system known as “silencing.” This decreed that a white cadet could not speak to or sit next to a black cadet except to con­duct official business. This was an unwrit­ten policy to which all cadets were expected to conform. Determined to graduate with his class, Clarence accepted this treatment and completed the required academics with perseverance. At graduation, when he went forward to receive his diploma, the entire class rose, as one, to give him a well-deserved standing ovation.
Due to World War II, the West Point Class of 1943 was accelerated so as to gradu­ate in January rather than June. Upon grad­uation, Clarence took two important steps: he chose the Coast Artillery as his branch of service, and, more importantly, he mar­ried Yolande Bradfield, a marriage which was to last 64 years. (Yolande, herself, had a distinguished career as a published psychi­atric social worker at the National Institutes of Health.)
Clarence’s first assignment following graduation was to an anti-aircraft unit with which he deployed to the South Pacific. For outstanding service with this unit, he received the Army Commendation Medal. In 1953, he was selected to attend the University of California, Berkeley, where he earned a master’s degree in bioradiology.
In 1966, he began his tour in Germany as commander of the 10th Artillery Group, 32nd Army Air Defense Command, and later received the Legion of Merit for out­standing service. For his work in the office of the Secretary of Defense, his last assignment in the seventies, he was awarded the Joint Services Commendation Medal. During his military career, Clarence was selected to attend the most prestigious service schools: the Naval Postgraduate School, the Army Command and General Staff College, and the National War College.
Upon his retirement from the military in 1972, Clarence embarked on a second rewarding career in research and academia, from which he retired in 2000. He served his country with distinction, retiring as a colo­nel with many honors. To him, the West Point motto of Duty, Honor, Country was the shining beacon that guided him his whole life.
We honor you, Clarence Davenport.